Mr. chair, your excellencies, ladies, gentlemen, all other people present,

A happy and prosperous life. That is what my parents wished for me. My mother was a trained nurse who stopped working and became a housewife 2 years after her marriage in 1959. Back then that was what was expected of her in Dutch society. My father was a mechanic, disabled at the age of 50, after many years of hard physical labour. 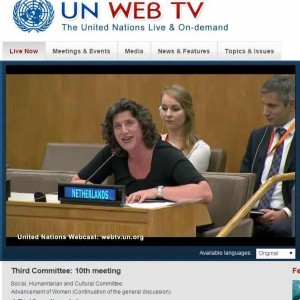 Now, 46 years old myself, I realize how fortunate I am to have lived and to be living the kind of life my parents wished for me.

As the youngest child of five and their only girl after four boys, I was the child with brains, and thus the first in my family to visit grammar school and go to university. After graduating, my career slowly but certainly unfolded into a broad entrepeneurship. I became a professional singer, event organizer, writer, professional speaker and… a human rights’ advocate.

I simply have to step up for others whose cultural, religious or social surroundings are so unsafe, that they must remain silent. That’s why I feel so privileged that the women of The Netherlands have chosen me to be this year’s women’s representative and, in that, their spokesperson.

On September 27 over 80 world leaders reconfirmed their recommitment to the Beijing Platform for Action and the call to step up for gender equality so that we have “substantive equality by 2030”. Regarding the advancement of women, we definitely encounter huge issues like ending gender based violence, inforcing their right to free control over body, life and love, without any forms of discrimination or stigma. [1]

Of course these issues aren’t limited to just women and girls.

When we discuss human rights for all and if all present really want to “Step it Up”, then the human rights and equal rights for people who identify as lesbian, gay, trans, bisexual or intersex – LGBTI in short – have to be named and included.

On September 29 I was utterly thrilled to hear of the historic statement made by 12 United Nations entities, including UN Women, to call on states to act urgently to end violence and discrimination against LGBTI adults, adolescents and children. [2]

After all, we are now in a situation that within a world population of over 7 billion people, almost 2.8 billion people live in countries where traditions, religions, values, customs and culture are put before human rights. Where being LGBTI could lead to imprisonment and corporal punishment. Such is the case in 76 countries. Or even the death penalty, which is true for 7 countries.

This is hardly the life one would wish for their loved ones. Dear delegates you wouldn’t, would you? For your child, your sibling, your friend… for yourself?

In order for people to lead a prosperous life, they need to be in a safe environment, to be treated equally whatever their gender identity or sexual orientation in order to reach their full potential both privately and professionally.

When I found out I was more likely to fall in love with women than men, I received support from my parents, my brothers and… well, I can’t even think of even one single person who turned me down for being a lesbian. If a hate crime were to happen to me, the law would be on my side. The police would stand with me, the mayor would stand with me, the prime minister, the government. I feel protected, safe and happy.

NOW is the time for all of us to “Step It Up” for the advancement of all women, whether they be heterosexual, lesbian, bisexual, transgender or intersex. Let them feel protected and safe, to be able to lead happy and prosperous lives.

I’m sure that that’s the kind of sustainable development goal we all would like to reach. Where no-one is left behind. And preferably soon, but certainly no later than 2030.

Statement by Irene Hemelaar, Dutch Women’s representative in the Netherlands delegation to the UNGA 2015.

In fond and loving memory of my parents Will Zonneveld and Chiel Hemelaar.

“Keep a heart filled with warmth and love in your chest

But remember, you rule on your square meter.

Whatever you’re looking for, you’ll have to fend for yourself

Thanks to all of you, as well to everybody whose names aren’t mentioned here, for standing with me and showing your faith in me to bring this huge task to a good ending.

Your love, friendship, wisdom, understanding and guidance make my life a prosperous one and you all make me so very very very happy (I feel a song coming up). <3